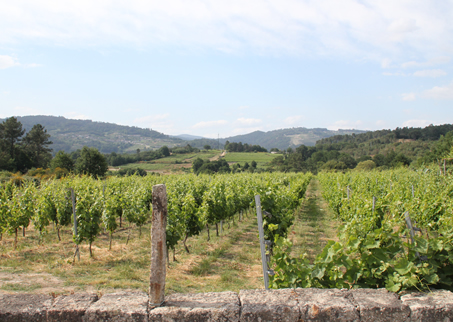 The vineyards of Valdavia cover a little over two hectares. There are four plots surrounding the bodega in Cuñas where vines have been grown for over 800 years: PAXAREIRAS, PINTUREIRAS, VIÑA GRANDE and PUZOS.

The vines grow on trellises in rows facing north-south to optimise their exposure to the sun.

Cuñas is a small village in the Avia Valley, at 140m above sea level and has a south-west orientation. The soils are granite based and have low organic content. The natural drainage leads to a scarcity of water. This forces the plants to self-regulate production producing higher concentration in the grapes and better quality wines.

The white varieties are Treixadura, Albariño, Godello and Lado and the reds are Mencia, Brancellao, Caiño and Souson. These are the principle autochthonous varieties which give the various CUÑAS DAVIA wines their distinctive personalities, along with the terroir from which they come.